SEARCH and rescue teams in the Wasdale area of the Lake District say they have discovered a body while looking for a hiker who was reported missing almost a week ago.

Volunteers from local mountain rescue teams say they found the body of a man on Scafell last night.

No formal identification has been confirmed, but officers say they have informed the family of the discovery.

2022-07-08
Previous Post: How to remove mould and mildew from a tent
Next Post: Moment a huge avalanche crashes over group of hikers 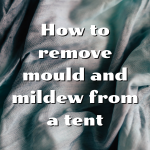