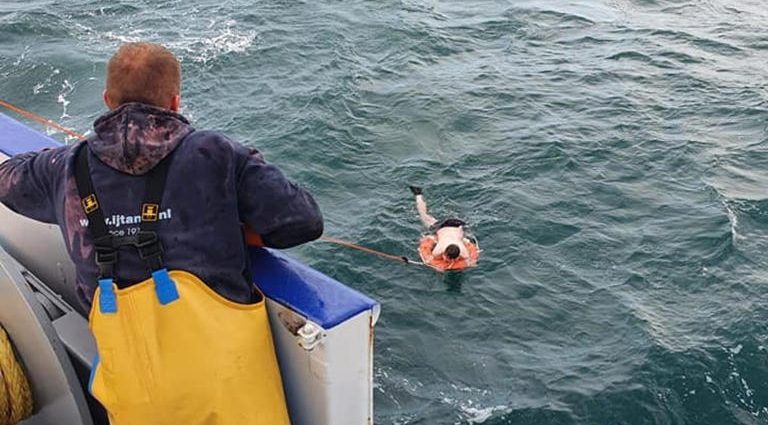 RESCUERS have saved a man who was found in the English Channel after attempting to paddle from Dover to France.

The man, believed to be in his twenties, was wearing just a pair of swimming trunks and was discovered clinging to a buoy this morning after his inflatable kayak had capsized.

The crew of the Dutch fishing boat pulled the stricken adventurer aboard where they wrapped him in blankets and gave him a Snickers chocolate bar before a French helicopter crew airlifted him to hospital Boulogne. It is understood he told rescuers he had been on the buoy for about 48 hours.

The captain of ‘De Madelaine’ – Teunis de Boer – said his vessel was halfway between England and France when they spotted someone “waving like a madman”.

Middle of the English Channel

The seafarer added the kayaker was in a severe state of hypothermia, with a body temperature of just 26C, and also suffering from dehydration.

“This morning, very early in the morning, a fishing vessel reported that a man in his thirties seemed to have taken refuge on the Colbart Nord buoy, located in the middle of the traffic of Pas de Calais,” the French Coastguard told Sky News.

“The fishing vessel rescued the shipwrecked person and picked him up on board. This man had left the British coast about 48 hours earlier, to try to cross the Channel on an inflatable kayak. The castaway is conscious, but his state of health requires rapid treatment.”