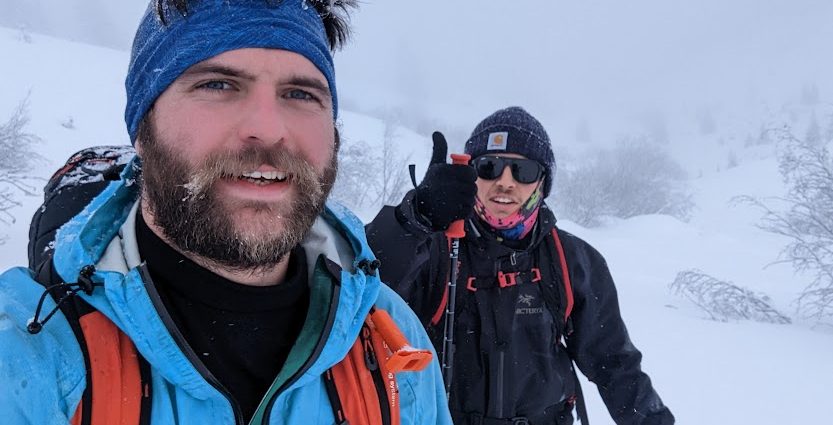 Adventurer Alastair Band was enjoying what he thought was a day of fairly standard skiing in the French Alps – familiar slopes he knows like the back of his hand. But there was nothing standard about how the day ended. Little did the 33-year-old know he would be staring death in the face at the mercy of an unforgiving avalanche. Luckily, some good training, excellent equipment and a couple of cool heads saved his life. Here, he explains to Ever Wild Outdoors how he’s still here to tell this tale…

Tumbling down a mountain face at nearly 40 km/h, completely blinded by snow thundering over my head and feeling weightless as I was carried over a cliff was not how I had envisioned spending my third wedding anniversary.

My wife wasn’t too happy when I called her to tell her about what happened.

I am alive to tell this story because my friend and I both had airbag systems, transceivers, probes, shovels and have done multiple avalanche safety and rescue courses. These investments saved my life. Please do the same.

Never ski alone in the backcountry. I was with my friend Marius who was there to dig me out. He also had the same safety equipment and training. I owe you a few beers, Marius.

The avalanche risk was 3 out of 5. This is still a big risk. It sounds, and reads, like it’s not a huge danger. It really is.

I live in the Haute-Savoie region of France in the Portes du Soleil. Morzine is my home and, while a low resort, it offers some of the best terrain in Europe for exploring the backcountry not too far from where the lifts finish and you need to put the skins on.

A well-known area is the Pointe de Vorlaz bowl, there are so many lines to ride there that you could spend a week just going up and down this small area.

This was our choice of location. We started with two coffees in Avoriaz before heading over for our day of adventure. The excitement was palpable.

We hadn’t had much snow for nearly a month, December started strong but then fizzled out with the freezing level rising. This meant we had rain, and lots of it, right to the top. But finally this week we got about 60cm of snow, and with the wind direction it meant the Vorlaz bowl got a pounding with the good white stuff.

Two days prior we had hiked up and ridden the main face with no dramas and face shots of powder on the way down. There was a tree line we wanted to ski but we came down too low to ski it without skinning up again, and with more snow due we made a plan to return and do a slightly different route.

Skip forward to January 11 and we’re looking at a day with decent visibility in the morning and a plan to go touring. Initially we thought we could get up and over the ridge into a route locally known as “Pepsi Max”, I don’t know why it’s called that but I’ve never skied it and I really want to. Anyway, the clouds started to come in so we reverted to our original plan to skin to a plateau on the looker’s right in Vorlaz bowl, cut across and ride through the trees.

Here’s where I made a major error.

I heard what sounded like rolling thunder and assumed because it was cloudy and snowing, therefore it was thunder. Turns out this is a highly unlikely scenario. Thunder snow is a phenomenon that is incredibly rare. The likelihood is that it was either the snowpack moving or a nearby avalanche. I believe it was the latter as we didn’t feel it, only heard it. But that’s a serious warning sign and a huge lesson to learn. If you hear “thunder”, get the hell out of dodge. Other avalanches are a big indicator that there will be more. This is a massive red flag of danger, and I missed it.

We were traversing across to get to our route down, using FatMap to follow the lower gradients and staying sub 30 degrees, but still going one at a time from high points of safety just in case.

As I led us forward, I saw that the snow below me was behaving strangely. If you ski a lot you know how it normally falls as you ski across it. I hadn’t seen snow behave like this before. I looked up and saw the whole slab above me sliding.

My brain kicked into survival mode.

I let go of my poles and deployed my airbag.

As the avalanche gathered pace, I knew I couldn’t do anything more. My airbag was deployed and now I had to just go along for the ride.

The whole way down I was waiting to hit a rock, hit a tree – something – and break a leg, my hip, my back. I couldn’t see anything. I was fully under the snow but I knew I wasn’t too far under as I could feel myself being pulled up by my airbag.

Then I went over a drop and felt weightless.

Not being able to see, not knowing where I was, I thought I had met my maker.

I was sure I had gone off a cliff and was going to die.

Then I stopped and I could see light through the snow. I knew I was upright and my hand was near my face. Everything I had been told is that it’s pointless to try and get out, you are not going to. Curiosity got me, and possibly because I could see the light coming through, I gave it a wriggle and soon realised I was fully stuck.

I remembered the training and that it’s a fastrack to suffocation if you panic and keep trying to move and get yourself out. You breathe heavier and that melts the snow and creates an ice barrier meaning the carbon dioxide you exhale can’t dissipate through the snow and you die.

I breathed lightly and calmly while trying to process what had just happened. This also potentially saved my life.

One thing I was told, and had read in Bruce Tremper’s “Staying Alive in Avalanche Terrain”, was to keep a hand close to your face during an avalanche.

Once I figured out that my right hand was close to my face, I could dig an airway to the surface, but every time I knocked away the snow more came in and filled my mouth and airways as I gasped for air. If this happens, stop trying to breathe, melt the snow in your mouth and swallow it like a good boy.

Finally, the snow stopped coming in and I had a clear airway. I shouted and shouted until Marius responded. This saved crucial time in him finding me, and I fully attribute me being so close to fresh air to having an airbag system.

Marius came down and dug out my head area first, then asked if he could take a photo. I, of course, obliged. Without a GoPro I needed something for social media.

Next I asked him to dig out my legs and get my skis off, I knew I was OK but my leg was twisted a bit and it was rather uncomfortable. My friend, and life saver, dutifully fulfilled my request and dug out my right leg, released me from my ski and then dug for my left leg.

“I have good news, I have got to your left leg. The bad news is that there is no ski attached to it”

This also highlights how heavy snow can compact in an avalanche. I was convinced my ski was still attached to my left foot but it was just the weight of the snow.

Marius finishes digging me out and we start probing and shovelling for my ski. Fast forward nearly two hours and our endeavours have proved fruitless. With the snow coming in we call it quits and, with one ski strapped to my bag, I start the long walk down.

It’s taken me a few days to write this as I’ve been trying to process what happened. I still haven’t properly come to terms with what happened, other than knowing I am one lucky person, as there are so many thoughts going through my head trying to pinpoint where I went wrong.

Things I did right…

Things I did wrong…

I had totally forgotten that I was tracking my route in all the commotion, but having my Garmin tracking everything made for some interesting data.

My heart rate peaked at about 115 bpm during the ordeal. Thank you training for allowing me not to panic.

I got buried in an avalanche and all I lost was a ski and my poles.

I got incredibly lucky but I also made a lot of my own luck with training and having the right kit. Airbags are expensive, but I would pay 10x what I paid for mine having seen first hand how amazing they are.

Sure, I made mistakes and they could have cost me my life but if there’s anything to take away from reading this it is to be overly cautious. If you have any doubt, then turn around and go back to safety.

This is a great story to tell, but I could also not be here to tell it.

Stay safe out there.

If you’re in the Haute-Savoie region, I recommend George Treble and Mark McKellar of Avoriaz Alpine Ski School and Paddy Morris for mountain rescue knowledge and Jason Day of DaysAway Adventures for knowing what to do if you get caught out and also for first aid if you need to help yourself or someone else.

My ABS backpack is a Scott E1 Alpride 30L.

PS: If you find a single Armada Whitewalker in the Vorlaz bowl, it’s probably mine and I would like it back.

2023-01-17
Previous Post: Landowner on Dartmoor wins right to ban wild camping
Next Post: Duchy of Cornwall leads way in wild camping decision for Dartmoor as agreements are reached with other landowners