How to catch and cook crayfish

FOR anyone who enjoys the food of the wild, there are few tastier rewards than crayfish.

Easy to catch, simple to cook, and utterly delicious.

However, as is often the case with any wild food, you need a little knowledge – not to mention a licence, in this case – before you start gathering or catching.

Firstly, and this goes for anything you forage, you will need the landowner’s permission. Also, as you’ll be extracting from a waterway, you may need the permission of the angling authority which manages the water. Make sure you research your permissions before you start.

Second, and perhaps most importantly, get a grasp of the species you will be looking for. In the UK, the three key freshwater crustaceans are the White Clawed Crayfish, the Signal Crayfish, and the Turkish Crayfish.

The White Clawed Crayfish is a protected species, and can only be handled for scientific purposes. It is native to the UK and is under threat from its larger and more aggressive American cousin – the Signal Crayfish – much the same way as the red squirrel has been squeezed out by the grey.

However, you will be doing the native species and the environment a favour by going after the Signal.

The Signal Crayfish (Pacifastacus leniusculus) was introduced to Europe when fisheries were being decimated by a fungal plague in the late sixties. Prolific-breeding Signals were brought in to supplement the supply.

It was soon discovered, though, that Signals were also carriers of the crayfish plague. Their population proved hard to control, leading to them quickly establishing themselves in waterways across Europe.

By the mid-1970s, scientists were beginning to understand the devastating impact the invasive Signals were having on native species. In the UK, the White Clawed Crayfish was being bullied out of its territories and pushed into the endangered status it has today. Further damage was also being caused by the invaders’ nesting habits – they burrow under the water’s edge, often eroding to the point of significant bank collapse.

To this extent, the capture and consumption of the Signal Crayfish is encouraged. However, you simply cannot head out with a net and grab them wherever you find them.

There are, rightly, some strict rules, regulations and guidelines – all largely in place to protect other species from unnecessary harm.

The first step, once you find a waterway with Signal Crayfish, is to seek permission of the landowner. As most wilderness explorers and foragers know, this is a common law of the land and applies to anything from picking a dandelion in a nearby field to hunting deer on vast estates.

Trapping crayfish without permission could lead to prosecution and a fine.

Once permission is granted, it may be that you will also have to seek approval from a local angling club or society which may hold the rights to fishing the water.

Then, just when you think you’re ready to begin harvesting the delicious bounty, you’ll also require a licence from the government.

Unlike an annual rod licence, however, it is free, and can be applied for here… https://www.gov.uk/government/publications/application-for-a-licence-to-keep-non-native-crayfish-form-cray2.

Once your application is approved (it usually takes no more than three weeks, unless the water is in a designated site of special interest), you will then possess Environment Agency approval to catch non-native crayfish with up to 500 approved traps, identification tags for the traps, and a ‘catch return’ form.

Seems like a superfluous faff, but the regulation is designed to prevent unscrupulous abuse as well as ensure the traps cannot harm species like water voles and otters.

Before you head out hunting your first crayfish haul, let’s double check the species identification, so you can be 100% certain you’re trapping the invasive, non-native Signal Crayfish or the Turkish Crayfish, rather than the endangered White Clawed Crayfish native to the UK…

One of the most noticeable observations of the White Clawed Crayfish (Austropotamobius pallipes) is the smooth surface of its tail, compared to the rough head and spiny claws.

The second key identification indicator is the size and shape of the claws which appear relatively small. The length of the main section of the claw will be similar to the width of its body.

Thirdly – and here’s where it gets its name – the species has noticeably lighter undersides to its claws compared to the top. Hence the name.

Colouration everywhere apart from the pale underside of the claws is largely reddish-brown, although darker and lighter variations are commonplace. 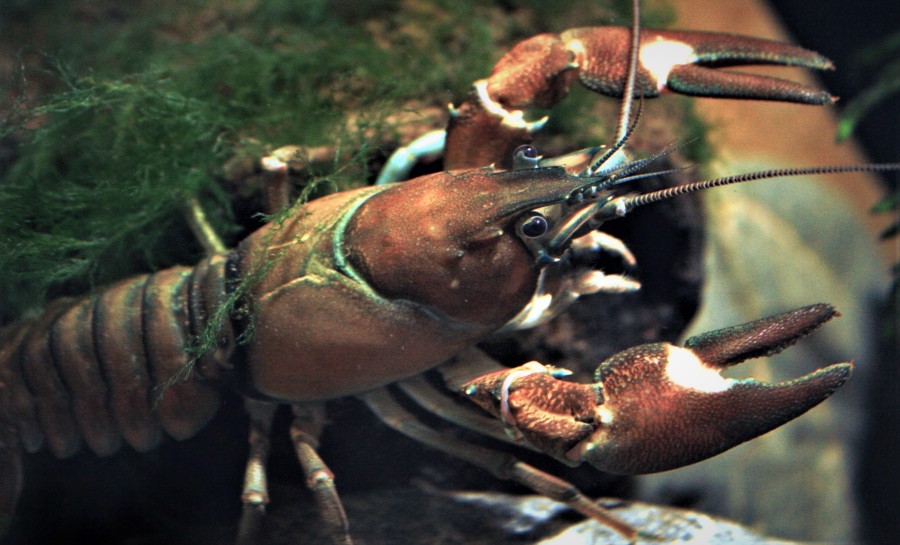 The Signal (Pacifastacus leniusculus) is instantly recognisable as it will appear smooth from head to tail, with very little evidence of spines. Some dotted indentations can be observed on the claws.

Its large claws give it away instantly and identify it as nothing like the native White Clawed Crayfish. On a Signal, the claws are as long as the main body from the base of the tail to the nose (rostrum).

Colour variations are wider than the native species, but the underside of the claws are almost always a reddish brown.

Perhaps the greatest giveaway to the Signal’s identity is the small patch of colour – the ‘signal’ – which appears on the hinge of each claw. It will be white or pale blue.

The lesser known of the two invasive species is the Turkish Crayfish (Astacus leptodactylus) which is also referred to as the Narrow Clawed Crayfish.

It too was “accidentally” introduced into the UK where it quickly established colonies in the south east of England where its main population still exists.

It has since spread as far as the Midlands.

As the name suggests, it has long, narrow claws which set it apart from the White Clawed and Signal species.

It is rough from head to tail, and will largely appear with a yellow or greenish hue. The Turkish Crayfish also tends to prefer still waters and canals, rather than rivers, although they do inhabit some rivers.

How to humanely dispatch a crayfish…

Dispatching a Signal or Turkish Crayfish, as with any animal we intend to eat, should be done as quickly and humanely as possible.

There are various methods and suggestions which largely involve either putting them in the freezer for 40 minutes before plunging them into boiling water, or putting them in a pan of water and slowly bringing the temperature up.

Personally, I’m not a fan of either methods as there’s a part of me that fails to see them as particularly humane.

Also, if I’m cooking crayfish, it’ll be largely done on the campfire close to where I’ve caught them and, seeing as my canoe doesn’t have a freezer, the deep chilling choice is off the cards anyway.

I also don’t want to see the option of simply throwing them into the pan to be cooked alive. If I’ve caught something I am going to kill and eat, I’ve done so for the need for food – not for the sport of torture.

Instead, I prefer to dispatch immediately with a long, sharp blade. Swiftly, between the eyes and with a couple of rapid twists.

This sounds gruesome, and it is not something many of us wish to think about. Dispatching any creature – even for food – is not something I enjoy, and I sincerely hope no one would take pleasure in it. Yet, it is a necessary bushcraft skill and being able to be efficient, clinical and well-practiced at it will ensure minimum suffering.

How to cook crayfish…

There are as many recipes for crayfish as there are for shrimp and, frankly, it’s hard to even muster any to mind because now all I can think about is Forrest Gump’s best friend Bubba reciting a monumentally-long list of shrimp recipes.

However, out in the wild, there is only one way cook crayfish. The, hopefully-dispatched, crayfish should be dropped into a pan of boiling salted water a handful at a time.

Five minutes in the boiling pot should be enough to cook the meat.

Once cool enough to handle, break away the tail and pull the flesh out of the shell. Gently prise the meat apart along the spine to reveal a black vein which you can then remove. You should be left with just the meat.

Don’t miss: How to make the perfect cup of tea outdoors

Before discarding the head and body, look in the cavity to see if there are any roe (eggs), as these can be extremely tasty and offer up good nutrition in the wild. The claw meat tends to be fiddly and barely worth the effort, but a decent-sized claw is worth a go. Give it a crack with a smooth rock and tease the meat out with the tip of the smaller finger of the claw.

There are some very simple and very effective ways for trapping crayfish. In fact, the crabbing nets you’ll see dangling from the eager hands of kids lining harbour walls on a sunny day are perfectly adequate.

Or you can fashion your own drop-trap, as successfully executed by Guardian columnist George Monbiot some years ago.

Unfortunately, these days, strict laws surrounding the trapping of crayfish mean we’re not allowed to turn up to a river clutching last summer’s crab net and an out-of-date fish head for bait without an official piece of paper in one hand.

If you intend to use a trap, even the very device we can use must be approved by the Environment Agency.

To meet approval, you must submit dimension details for every part of your trap. If the Environment Agency considers your trap to be inadequate, they will not grant permission to catch.

It all sounds complex and a bit of a bureaucratic wall to hurdle, but don’t let it discourage you from trying.

After all, removing and eating invasive crayfish is doing good for our environment, as well as going some way towards helping an endangered species reclaim its territory.

Oh, and did I mention they’re really delicious?

2021-03-06
Previous Post: New short film highlights threat to one of Europe’s greatest rivers
Next Post: What kind of adventure holiday should I go on?